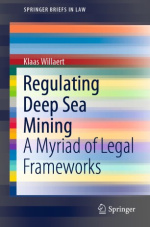 The wide array of activities which we refer to as deep sea mining are not governed by one universal framework. On the contrary, numerous legal instruments play a role and it is important to maintain a clear overview. The United Nations Convention on the Law of the Sea (UNCLOS) evidently sets out the overarching regime, but important distinctions must be made. For example, deep sea mining in the Area is subject to international regulations adopted by the International Seabed Authority (ISA), while similar activities on the continental shelf fall under national jurisdiction and are governed by domestic legislation of the coastal state. This dichotomy must be nuanced, however, taking into account that non-state actors conducting deep sea mining operations in the Area must also adhere to national laws of the sponsoring state, while mineral exploration and exploitation on the continental shelf are likewise subject to a number of international rules and principles. Moreover, separate exploration regulations were adopted by the ISA for distinct categories of mineral resources, and national legislation on deep sea mining is quite diverse. This monograph intends to clearly identify all relevant legal instruments, assess their role, explain their interactions and engage with some of the topical issues that surround them.