After his studies, Carl completed internships at the Brussels data protection law firm time.lex and the Embassy of Belgium in Washington DC.

In February 2018, Carl joined the Law and Technology branch of the Department of Interdisciplinary Study of Law, Private Law and Business Law as the academic assistant to Prof. Dr. Eva Lievens. He is currently preparing his doctoral thesis on data protection under her supervision. He is also a co-editor of the Digest of State Practice section of the Journal on the Use of Force and International Law (JUFIL). 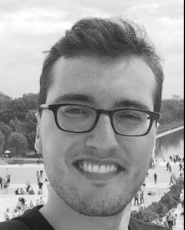