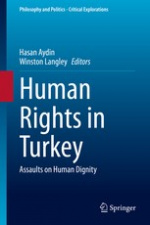 Non-discrimination, minority rights and self-determination: Turkey’s post-coup state of emergency and the position of Turkey’s Kurds

States of emergency are often declared due to underlying problems of minority group accommodation, and the extraordinary limitation of rights arising from them tends to have a particularly striking effect on such groups. This was true, for instance, with the emergency measures adopted by the British authorities in the context of the ‘Troubles’ in Northern Ireland. The same appears true in respect of the Turkish state of emergency in the aftermath of the failed military coup of 15 July 2016 vis-à-vis the position of Turkey’s Kurds. In spite of the fact that the declaration of the state of emergency constituted a response to an attempted coup which was, allegedly, orchestrated by the Gülen Movement, it is clear that the resulting derogating measures have also targeted ‘other individuals and organizations’, mainly those allegedly connected to the PKK (Kurdistan Workers’ Party), and thus extended to Turkey’s Kurdish periphery. This chapter seeks to map the impact of the Turkish post-coup derogation measures on Turkey’s Kurds and to test them against the non-discrimination principle, minority rights, and the right of self-determination.