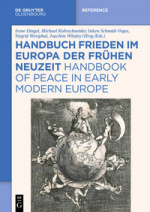 Peace is a political construct in the early modern period. War was viewed as a process whereby two sovereign states pursued their rights by violence or artifice. Domestic and international law were intertwined in legal doctrine. Authors of natural law-treatises incorporated an ought-dimension in their writings to describe the framework in which sovereigns should act according to a systematic analysis of a morally established hierarchy. This chapter first provides an elementary overview of sources and historiographical traditions (I). Second, it presents the classical canon of doctrine, from Spanish neo-scholastics (Vitoria) to so-called positivism (Martens), as it developed in relation to the broader intellectual, religious and institutional context as Humanism, Enlightenment, confessionalisation, and the Empire shaped thinking about war and peace (II). Finally, the chapter offers a brief overview of the practical use of legal arguments: treaty collections and repositories of pamphlets were used in political practice in conjunction with classical authors such as Gentili, Grotius or Pufendorf (III).