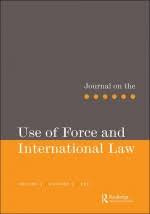 Russia’s attack on Ukraine and the jus ad bellum

(2022) 9 Journal on the Use of Force and International Law

The 24 February 2022 Russian invasion of – or ‘special military operation’ in – Ukraine has sent shock waves across the globe. In this editorial the Editors-in-Chief of JUFIL examine in detail the legal justifications advanced by President Putin for Russia’s use of military force and subject them to scrutiny. Doing so highlights just how devoid of substance and credibility they are within the context of the jus ad bellum as it exists today. Furthermore, the Editors reflect on some of the broader questions that this use of military force poses for the jus ad bellum, including what the invasion of Ukraine says about the efficacy of the contemporary jus ad bellum and what is – or what might be – the ultimate impact upon the rules and norms governing the use of force.