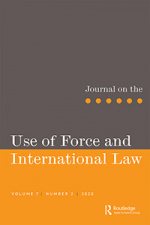 The Doctrine of 'Negative Equality' and the Silent Majority of States

Journal on the Use of Force and International Law, volume 8(1)

Critics of the so-called negative equality doctrine, which prohibits third-state military intervention upon invitation by a government embroiled in civil war, point to recent contravening practice together with a generally passive or politically supportive attitude by states to substantiate their views. If, however, a prohibition indeed remains the starting point under the lex lata, that critical view largely depends on the legal transformation of state silence into acquiescence.

This article contests such a transformation based on the accepted conditions for acquiescence to arise, concerns which are confirmed by two case studies on interventions in the Libyan and Yemeni civil wars. As a result, states’ inaction to controversial military operations rarely qualifies as ‘negative opinio juris’. Indeed, the erosion of customary international norms, especially those that regulate sending troops to war, surely requires more than a few deviant states and a regrettable but legally inconsequential apathy by the international community.