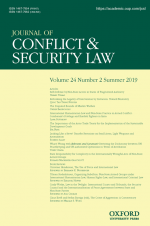 According to the United Nations Secretary-General, Yemen today constitutes the worst man-made humanitarian crisis in the world. It is fuelled by extensive third-state involvement, with none of the warring parties championing respect for international human rights and humanitarian law (to put it mildly). Conversely, primary rules of international law already prohibit arms transfers from the moment there is a significant risk that they could be used to commit or facilitate grave breaches, with the recipient’s past and present record of respect for international law qualifying as the crucial factor to predict future transgressions. From that perspective, it appears deeply disingenuous for western states to continue transferring military equipment to members of the multilateral coalition in Yemen while maintaining adherence to the international legal framework. This article thus aims to examine whether the legal framework lives up to its noble goals or rather serves to defend state decisions that primarily serve their economic interests. It is structured as follows: Section 1 starts with an overview of the facts, and the focus and aim of this article. Section 2 then sets out the international legal framework as it applies to the trade in conventional arms with states that are involved in a non-international armed conflict. Section 3 analyses key domestic judgments (in the UK, Canada, Belgium and France) to test the available facts against the legal framework as elaborated. Finally, Section 4 concludes.