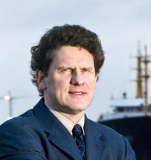 Prof Dr Eric Van Hooydonk is a professor of law at the Maritime Institute of the University of Ghent, Belgium, and an attorney-at-law in Antwerp, Belgium. Eric’s main areas of practice and research fields and are international law of the sea, EU and national maritime and seaport law and the law of public undertakings and public-private partnerships. His preferred subjects are maritime regulation in all its aspects and the law of seaports in the wide sense. Eric is a Doctor of Laws (University of Antwerp, 1994), a Master of Maritime Sciences (University of Antwerp, 1988) and a Master of Laws (University of Antwerp, 1988). His doctoral thesis (1994) consisted of an in-depth analysis of the legal aspects of port management. From 2000 to 2010, Eric chaired the European Institute of Maritime and Transport Law of the University of Antwerp, which organised numerous successful events and publications. In 2007, he was appointed Chairman of the Royal Commission for the Reform of Belgian Maritime Law which prepared, on his initiative, a new Shipping Code for Belgium. In 2009, he founded Portius, the world’s first ever international and EU port law centre, which is hosted by the University of Ghent and the College of Europe at Bruges, Belgium, and Natolin (Warsaw), Poland. In 2014, Eric was appointed chairman of an International Working Group of the Comité Maritime International which prepares a restatement of the general principles of the maritime law or Lex Maritima. Eric is a Titulary Member of the Comité Maritime International (CMI) and a member of several professional and scientific associations as well as of editorial boards of legal reviews in various countries. Since 1995, Eric has run a niche law firm in Antwerp which handles major contentious and non-contentious cases for institutional clients including in countries within and outside the European Union. Also, he has been acting as a legal consultant in Southeast Asia since 1999.