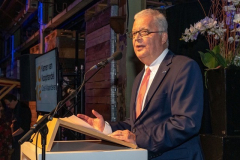 Jan Lagasse obtained his Masters degree in Law at the Ghent University and later completed his studies at Harvard University (US) and the International Institute for Management Development (CH).

He started his professional carreer as a professor's assistant at the Law Faculty of the Ghent University and in 1987 continued his career in several multinational companies. He worked for The Dow Chemical Company, Koninklijke Hoogovens (now Tata Steel) and Fokker (now GKN) in different functions (General counsel, M&A Manager, Post Merger Integration Officer, CEO) in different countries (The Netherlands, Belgium, Germany, UK & USA).

Since 1999 he always assumed the position of Managing Director/CEO and in 2014 he became CEO of Zeeland Seaports, a major Dutch port. He accomplished the merger of the Dutch Zeeland Seaports with the Belgian Port of Ghent in 2018 to create North Sea Port and was co-CEO of the merger port until late 2020. He is now a board member of several companies and associations, an independent consultant to ports in Europe and was appointed by King Willem-Alexander of The Netherlands as Honorary Counsel-General of the Netherlands.

Prof. Jan Lagasse is co-lecturer in the MSc in Maritime Science programme, where he teaches the course Contemporary Port Problems with prof. Daan Schalck.